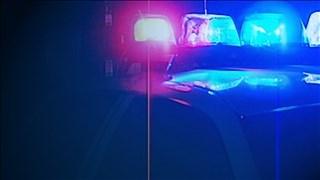 The incident happened just before 8:30 p.m.

During the investigation, officers were informed that the crash occurred as a result of the driver attempting to flee from another vehicle.

Police say the victims of the crash were fleeing after a passenger in the vehicle in front of them allegedly held a firearm out of the window and shot at the their vehicle.

The victim then told police that he shifted the vehicle into reverse and struck a tree.

The suspect vehicle left the area and police have not located any suspects at this time.