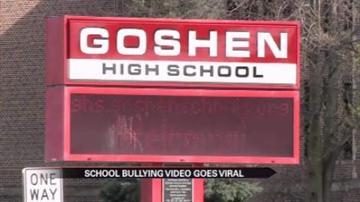 GOSHEN, Ind. -- A parent says her son received a video from other students threatening to kill him. The student's mother says the school isn't doing enough to protect her son.

Horn says she did not realize how bad it was until her son received a video from a classmate threatening to murder him.

The video was made in the cafeteria of Goshen High School and when she saw it, she immediately contacted the school.

"That’s my child they are talking about in that video," says Horn. "So it really made me scared, scared for my son’s life."

The school suspended the two teens involved, one for three days and the other for five days.

But that did not seem to help. Once back at school, the threats continued from phone calls and text messages, to Facebook posts.

It got so bad, she says her son is afraid to go to school.

"I called several times and said that he was still being threatened at the school and they said it was a he said she said thing so they couldn't really do anything about it," says Horn.

However, Monday school officials said the matter was addressed.

"We always handle it and maybe not everyone agrees with the outcome, but we always look into it and always handle it," says Goshen Schools Superintendent Diane Woodworth. "We absolutely want every student to feel safe at Goshen High School and all of our schools."

Woodworth says they take bullying very seriously and always investigate it. In fact, she says she will personally be looking into this matter and will follow up with Horn.

"I haven’t been able to reach her, but I will continue to try and reach her and see if we can have some resolve to this situation," says Woodworth.

Still, Horn says the damage is done, which is why she decided to take her son out of the school Monday. It's something she felt she had to do, but she says it should have never come to that.

"He is there to go to school and to get an education, not to be bullied, not to be in fear," says Horn. "He should feel safe there."

Horn says she has changed her son's cell phone number and will press charges against the teens.