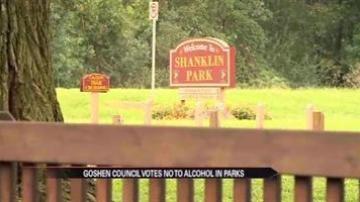 GOSHEN, Ind. -- Local cities are looking at different ways to bring in extra revenue besides charging for trash pick-up.

The mayor of Goshen wants to allow alcohol at some local parks.

Shanklin Park is one of the parks that the  mayor had in mind because of the enclosed pavilions there that could be rented for family reunions and weddings.

But it's a popular park for families and kids.

And last night, the Goshen City council voted against allowing alcohol in the parks.