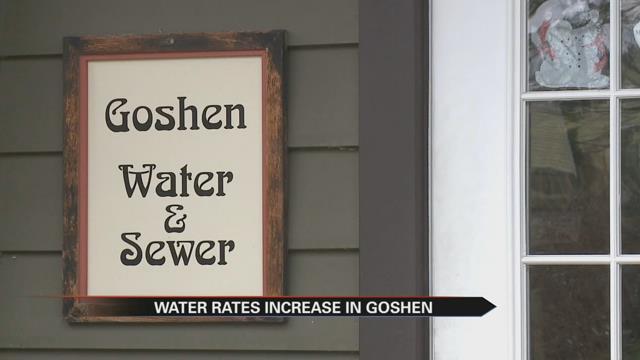 Goshen water rates have increased for the first time in 10 years. The increase is 41-percent and some say that is a spike they just were not ready for.

According to Edward Ahlersmeyer, Goshen City Council District 2, the city has been subsidizing increasing costs for years.

David Vanness has been paying bills in Goshen for 42 years but had a feeling the water price he was paying for the past decade would not stay the same.

“I’ve lived in this city and in Indiana long enough to know that it [price increase] is coming,” says Vanness.

Tuesday, that day came when the city council approved a 41% increase of the water usage rate starting in February 2016. For Vanness that is quite an increase.

“I’m on a fixed income like a large part of the citizens here,” says Vanness.

For the average customer the rate increase means about $6.50 more a month. The rate increase will help cover various water projects in the city and fund general maintenance.

“We have been holding our own up to a point within the last couple of years we started to go into a decline we started using depreciation funds,” says Dustin Sailor, Goshen Utilities Engineer.

Sailor describes how 'holding their own' led to this abnormal increase for Goshen.

“It was roughly discussed that a two to three percent increase just to cover inflation cost would be reasonable,” says Sailor.

To get closer to that gradual increase the engineering department has a plan.

“We will be doing a cost of service study in 2016 and come back to the council at that point and have a plan for them for when future rate increases will need to happen,” says Sailor.

The increase is a couple dollars a month for residents but for some top water users like Goshen Community Schools it means close to $10,000 more a year.

Judy Miller, Energy Coordinator, for Goshen Community Schools says they will look to make cuts where they can. Watering lawns might be one of those cuts to make sure the spending priority is on student learning.

Just like the schools will make it work, Vanness says he will too.

“For some of the citizens it’s really going to hurt them but fortunately I got a nickel and a dime and a closet so I’ll survive,” says Vanness.