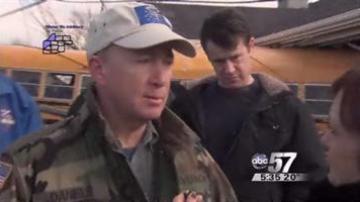 MARYSVILLE, Ind. -- Gov. Mitch Daniels got a firsthand look at the tornado devastation as he visited Marysville and Chelsea.

News cameras caught up with the governor as he surveyed the damage. Daniels issued a state of emergency for 11 Indiana counties. That's the first step in getting federal dollars to help those affected.

“We're not unfamiliar with the wrath of Mother Nature in Indiana, but this is about as worse as we've seen in the years since I’ve been in this job,” said Daniels. “I will say that it proves that preparation and better warning systems do matter and undoubtedly saved a lot of lives, I’m very impressed with the work of our people who responded. We're getting better at that every time it happens."

The death toll is still rising with more than three dozen people dead from Friday’s twisters in the Midwest and South.