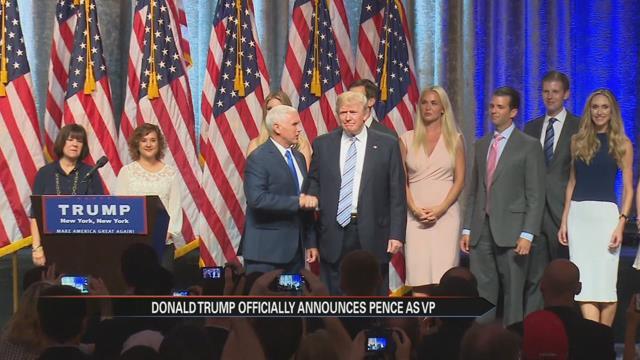 “I accept your invitation to run and serve as vice president of the United States,” Pence said at a press event Friday morning.

The Hoosier governor is now in the presidential spotlight.

On Friday, Trump told the world he had chosen Pence to be his running mate for two main reasons.

“One of the reasons is party unity, I have to be honest,” Trump said. “So many people have said ‘party unity’ [to me].”

The second reason hits a little closer to home, as Trump commended Pence for his economic record in Indiana – from balancing the state budget to cutting the unemployment rate almost in half.

“When I see what happened with respect to the numbers, the state and everything else, that, to me, was probably the single most important point,” Trump said.

Trump introduced Pence inside the midtown Manhattan Hilton Hotel Friday morning after a lengthy 30-minute speech; the billionaire often going off track while talking about himself or his dislike for Hillary Clinton.

But Pence eventually made it onto the stage and showed only compassion for his new running mate.

“Donald Trump is a good man and he will make a great president of the United States of America,” Pence said.

Trump labeled himself and Pence as the ‘law and order candidates,’ and he promised change and toughness – something Pence strongly echoed.

“Let’s come together as a party and a people and a movement to make America great again; and that day begins when Donald Trump becomes the 45th president of the United States of America!” Pence said.

Pence also took some time to introduce himself to the country, saying he is a pretty “basic” guy, and describing himself as “a Christian, a conservative and a Republican, in that order.”

The new presumptive vice presidential nominee already showing the American people he will try to balance out his running mate, who is anything but basic.