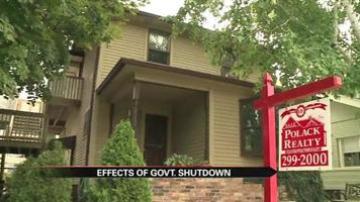 SOUTH BEND, Ind. -- The government shutdown is taking a toll on people who are trying to buy and sell homes. One woman says the shutdown is delaying the sale of her home and is affecting her purchase of another home.

"We were in perhaps a week of closing the loan and now we're indefinite," said Lisa Mackenzie.

It has been a frustrating week for Lisa Mackenzie.

She bought her dream home and just when her current home was about to sell, the government shut down.

It's a big problem because her buyer is using a US-Department of Agriculture loan to pay for the house.

Since it's funded through the government, that money just isn't coming.

"We haven't sold our home so we're stuck with two houses. We were going to use the proceeds to from the sale of our house to put down on our new home," said Mackenzie.

Now that's not an option.

She says they won't have that money to put towards furniture and other necessities.

"We have to put that all on hold until we get the proceeds and we can't until the USDA reopens and we don't see the light at the end of the tunnel," said Mackenzie.

Her mortgage broker Don Reber says this shutdown impacts others using the loan in the rural community.

"It's probably one of the most popular programs because it enables a buyer to purchase a home and not make any down payment because its 100 percent financing," said Reber.

He says the problem is even creating a ripple effect, making it much harder for everyone buying and selling right now.

It has been 3 months now and they're just anxious to close the deal.