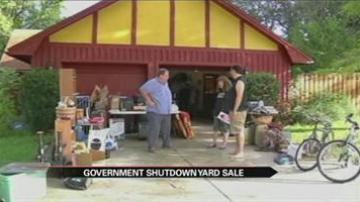 TITUSVILLE, Fla. --- The shutdown is forcing furloughed workers all over the country to look for other ways to get money.

The man is an IT Project Manager at the Kennedy Space Center.  He says he probably won't get any back pay when the shutdown is over.

So he and his wife decided to have a yard sale to make some extra money.

"It has been tough, I have a kid in college and one that is going there soon, and having to maintain a household, and still paying the bills, it's starting to get tough," said Pierre Gravelat.

Gravelat says if the shutdown goes on for weeks it could be a major financial burden on his family.