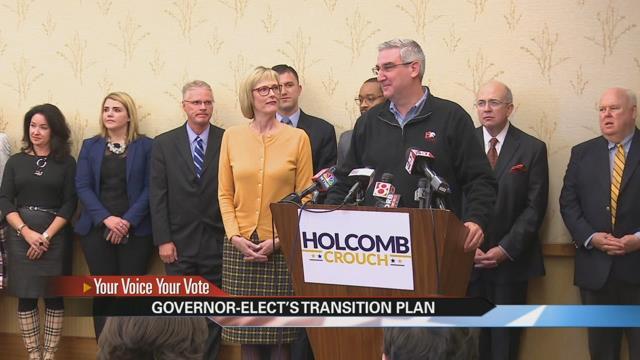 The passing of the torch in Indiana began Wednesday as Governor-elect Eric Holcomb announced his transition board.

“Our state government will reflect and reach out to every corner of the state; all walks; cities large and small; all communities,” Holcomb said in a press conference in Indianapolis Wednesday afternoon.

Holcomb promised a diverse administration and plans to continue building on the foundation Indiana Governor Mike Pence put in place before becoming the Vice President-elect.

“I talked to [Pence] last night,” Holcomb said. “He was my first phone call when they called the race. And I had a great conversation with him and was able to talk to President-elect Donald Trump as well. And I have high hopes for the future of Indiana.”

Holcomb said his top priorities as governor will be the same four principles he outlined in his 106-day campaign.

“We’ll be focused on making sure we protect our fiscal integrity,” Holcomb said. “We’ll make sure we’re focused on people, people, people; satisfying the requirements the 21st century workforce demands. We’ll make sure that we do deliver a long-term, data-driven, sustainable infrastructure program. And then it all starts with this board behind me in making sure that we’re delivering good state government services at a great taxpayer value.”

Holcomb also said his Election Day victory over Democrat John Gregg showed most Hoosiers are happy with the state of Indiana’s politics.

“Hoosiers all over the state of Indiana said last night that they want to keep this state moving forward,” Holcomb said. “They want to continue to forward momentum, and [they] like the direction the state is heading. They did not want to do a U-turn.”

The 16-person transition board – which has two Michiana residents on it – Holcomb and his Lt. Governor-elect Suzanne Crouch assembled will meet next on November 21.