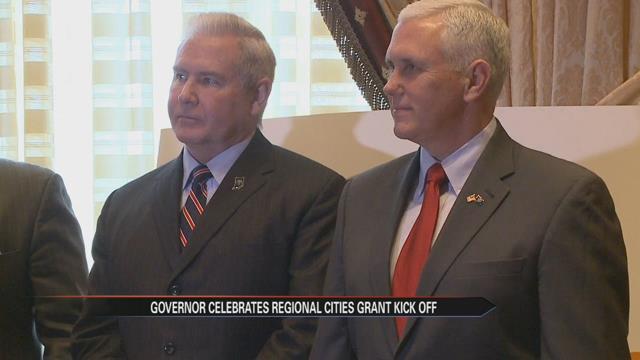 Today Elkhart, St. Joseph and Marshal Counties met with Governor Mike Pence to celebrate being the winners of a multi-million dollar state award. Major parts of Michiana teamed up and now have 42 million to spend thanks to the Regional Cities Grant.

Governor Pence said the projects that were presented from this area showed a true partnership between private, public, and educational sectors.

“It’s easy to think about bricks and mortar here this is really about people,” says Governor Pence.

Governor Pence says the goal of the Innovate Indiana funding is to create vibrant cities that will attract and retain talented people to live and work in our area.

“We are very focused on looking at 40 thousand students that are attending colleges and universities here in our region and using that pipeline,” says Regina Emberton, CEO of Michiana Partnership.

Emberton played a crucial role in forming the presentation of 39 projects that won the attention of Governor Pence. The project range from parks to river walks, housing developments, and renovating of the old Studebaker factory.

“I think that was something that was very fresh here Notre Dame and other academic institutions working with business and with local leadership,” says Governor Pence.

John Affleck-Graves Executive Vice President of Notre Dame was humbled by the compliment but says the projects are really about the collection of 22 cities and towns.

“We really want to prioritize the projects to which will have the greatest impact on our region and make sure that we have funds for the ones that will have that greatest impact. But at the same time we have a time line,” says Affleck-Graves.

The deadline to use the Regional Cities funding is 18 months.It still has not been decided which of the many projects will receive the funding. But local leaders understand just as they worked together to get the funding they will have to work together to spend it.

“What perhaps I think is a priority for Elkhart there will be other mayors and board members that will not think that to be the case and I understand that this has to be about compromise,” says
Tim Neese, Mayor Elect of Elkhart.

Even though we don’t know what will happen first, Regina Emberton with Michiana Partnership says you can expect construction to start in the first few months of 2016.