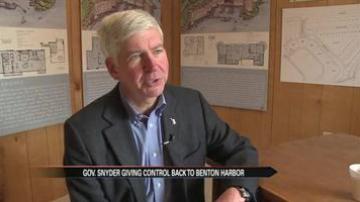 BENTON HARBOR, Ind. -- Emergency Financial Manager Tony Saunders was brought in to save the city of Benton Harbor from bankruptcy. The mayor announced earlier this week that Saunders will be gone in the next few months.

Many question whether the city is ready to stand on its own financially.

While some say Saunders' job is done, others believe politics is playing a role.

ABC57 spoke with Michigan Governor Rick Snyder to find out why Saunders is suddenly leaving town.

Governor Snyder said the state will slowly give control of the city back to Benton Harbor,

On October 15, Benton Harbor Mayor James Hightower dropped a bomb that left everyone in the audience stunned.

"In less than three months, the Emergency Financial Manager will exit and the Benton Harbor City Commission will regain control of city business," said Hightower.

Snyder sat down with ABC57 after he spoke with Saunders.

"We're working towards a transition soon so we can have the city back on a more normal path," said Snyder.

"His predecessor Mr. Harris, he was leaving for 3 years," said Muhammad.

Muhammad says it's no coincidence the governor is pulling Saunders out of Benton Harbor around the first of the year.

"With Governor Snyder announcing his reelection bid it would be a disaster for him to have emergency managers throughout the state," said Muhammad.

We asked if politics, or the lawsuit from Roger Lange had anything to do with his decision to pull Saunders out.

"You can run into cases of litigation and issues when you're asking for a lot of change very quickly but I think Tony's done a great job," said Snyder.

Once the emergency financial manager is removed, Benton Harbor still won't be on its own. Commissioners will still have to answer to a board put in place by the governor.

Governor Snyder says no decisions will be made without going through this board. He says the city still has to prove it can take care of itself.

"So people have confidence that it won't fall back into conditions like this again," said Snyder.

Once that board is appointed and put in place by the state, the current commissioners will have to take mandatory classes on how to govern a small city.