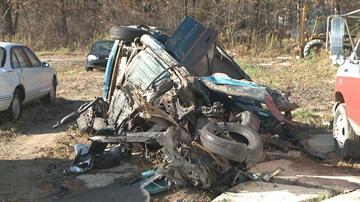 GALIEN, Mich. – A pizza delivery driver, listening to his GPS, made a wrong turn, landed on some railroad tracks and lost his car to an oncoming passenger train.

The driver, a 23-year-old from Niles, Mich. escaped unharmed.

Lijewski owns Roger’s towing.  He picked up, what little was left of the car, after Monday night’s wreck.

“It destroyed the transmission. The steering column is laying on the ground. The motor, it just explodes,” said Lijewski.

Police reports indicate the 23-year-old was listening to his GPS and was trying to turn from Cleveland Ave. on to Elgin St.   The driver told police the GPS said to turn after he passed the road and he ended up on the train tracks.

Not everyone who lived along the tracks is buying his story.

“I just think it’s weird he couldn’t tell the track was right there,” said Lori Freimuth.

Not long after his car got stuck on the tracks, the Amtrak train came barreling down the line.  He grabbed the pizzas he was delivering and got out before impact.

Galien Police officers said visibility was low at the time of the accident.

"It was dark. Who knows,” said Freimuth.

Neither the driver nor the passengers on the train were injured.