Graduation is bittersweet for area businesses 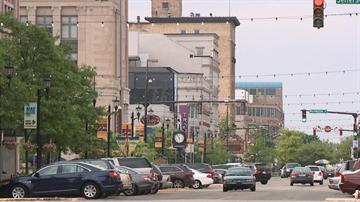 The sound of guitars signal a new start for managers like Vic Mann.

"It's a real seasonal business."

He and others notice a big drop off in sales come graduation weekend, meaning -- they'll have to find other ways to pay their rent this summer.

The summer slowdown happens every year, but with the continued growth of Eddy Street Commons, Downtown businesses are feeling its impact a little more.

"We're competing with something that's right across the street from campus, rather than hailing a cab or bus, and driving Downtown."

Meanwhile, bars like O'Rourke's on Eddy street are going gangbusters.

"It's a great time of the year," Andrew Pankowski, a manager, said. "The weather really picks up; it's a really celebratory weekend."

O'Rourke's is just a short walk from campus, so Notre Dame grads and their parents will have one last hoorah before heading out.

"That late night hour from 11 p.m. to 3 a.m. really takes a hit," Pankowski said. "I think it goes from a thousand to only a couple hundred."

So like Club Fever, they'll have to rely on concerts to get by until August.