Graffiti a growing problem in Goshen 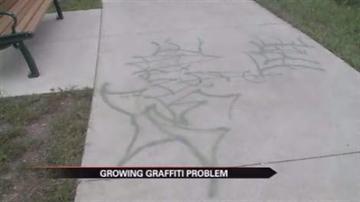 GOSHEN, Ind. -- Graffiti is a growing problem in Goshen. It is appearing on buildings, street signs, even sidewalks. Because of the increased amount of graffiti, the city is paying more money and spending more man hours on cleanup.

"If it's anything gang-related we make sure we get it taken care of right away. Within 24 hours if possible," said Denny Long, Goshen Street Commissioner.

Long says this has been a busy year for his graffiti clean-up crews.

Thursday there were reports of gang signs on the bike path between Main Street and Oak Ridge Avenue.

"We show pride in the city and we do not think the residents should have to look at it," said Long.

Residents say the problem has gotten so bad, graffiti is even showing up on the sidewalks.

"It said that they were taking over the neighborhood and it kind of got me all frustrated I'm thinking dude who would do this you know?" said Jessica Wagner.

Taking care of the graffiti costs taxpayers a lot of money.

"The guy that oversees that is making about $19 an hour or so and his time is wasted taking care of graffiti when it could be doing more important things," said Long.

Last year, graffiti clean-up cost the city more than $2,000. This year it will cost a lot more than that.

"I'm trying to still get all of those figures tied down I'm waiting for bills because a lot of the graffiti that we've taken care of has been within the last month or month and a half," said Long.

Thursday night, the Chamber of Commerce is holding a city wide task force meeting to try to find ways to trim the city's budget. Graffiti removal may be on the chopping block.