Grain elevator damaged by explosion scheduled to reopen in October 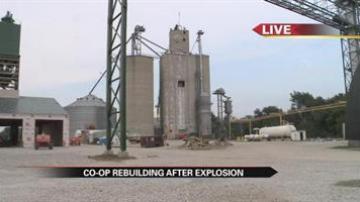 UNION MILLS, Ind. -- Construction crews are working around the clock to get the Co-Alliance Co-op back up to speed so it can reopen by October 1st. It has been closed since a grain dust explosion killed a worker in June.

The new grain elevator will be safer than the old one.

The original grain elevator was built in the 1960's and its legs were on the inside of the silo.

The legs of the new grain elevator will be on the outside, which is safer.

The grain dust explosion on June 24th at the Co-Alliance Co-op and the fire the following day was tough emotionally on farmer Ken Boilini.

"It was a real disaster. I was real good friends with the person Jim that passed away, that lost his life," said Boilini.

The facility has been closed since the explosion, which has been tough on Co-Alliance farmers.

They have nowhere to store their corn.

"It was a big problem because this summer we ended up with quite a few bushels of corn to deliver and we had to drive seventy-five miles to a plant," said Boilini.

The new grain elevator should be back in business for farmers October 1st-but only if safety violations that OSHA found after the explosion are fixed.

"There were seven violations but we have not received the formal notice of what those are," said Shawn Lambert of the Co-Alliance.

Boilini says it is a good thing Co-Alliance will be up and running by October 1st because there is a surplus of corn this year.

He'll be taking 100,000 bushels of corn to store at the Co-Alliance by this fall.

Lambert warns farmers that they'll need to be patient. When it reopens, there will be limited space.

"We will probably be able to process at 65 or 75 percent of what we have in the past," said Lambert.

Construction crews will be working for the next year to complete the entire project.

Lambert says co-alliance will be having an informal meeting with OSHA soon to find out exactly what those 7 violations were and how they can correct them.