Grand Prix likely to cause some traffic headaches 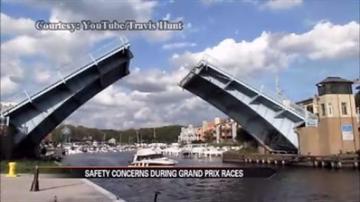 LAPORTE COUNTY, Ind. -- Michigan City's population will triple this weekend for the Fifth Annual Great Lakes Grand Prix. Spectators will gather in Washington Park, an area only accessible by drawbridge. What happens if someone needs emergency medical attention and the bridge is up?

A woman who works for the La Porte County Highway Department says there is an emergency plan in place, but it depends on the timing and courtesy of others.

It takes the drawbridge about five minutes to fully open and close.

That may not seem like a lot of time, but in the case of an emergency - every second counts.

The county highway department says should an ambulance go over the bridge with lights flashing, the bridge will remain closed until they cross back.

But that's only if the operator sees those flashing lights.

Also, there's been a problem with motorists ignoring crossing arms to avoid waiting in traffic.

All things - race organizers say they've been trying to improve on in the last five years.

"This is a little bit of a bottleneck when you come in off of U.S. 12 to get into this park. There were times in the first 2 years that we did this race where traffic was backed up for miles," said Jason Miller, LaPorte County Convention and Visitor's Bureau.

Organizers are asking spectators to help alleviate some of that traffic.

If you are going to come out to the race, there's a free shuttle service at the Lighthouse Outlets as well as the Marquette Mall.