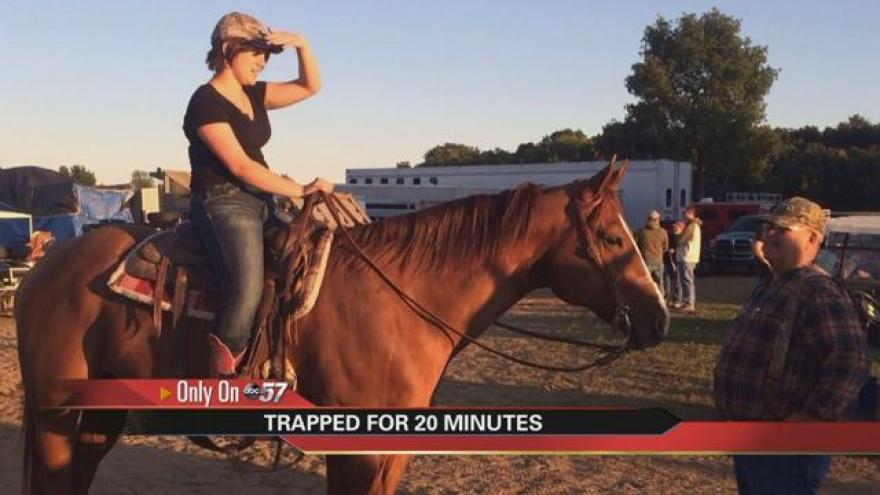 Last Wednesday, a 69-year-old man died after his pick-up truck crashed into a semi in Bristol. His granddaughter was trapped in the seat next to him for more than 20 minutes. Sunday, she spoke only with ABC 57’s Jess Arnold.

“The whole time, it was just memories of what led up to it, and just that moment of wow, I’m really lucky to be alive,” said Santanna Mosher, Terry Shelhamer’s granddaughter.

Santanna’s grandfather was driving along State Road 15 Wednesday, when a semi pulled out in front of him. He tried to stop, but couldn’t.

Terry died instantly. His granddaughter was trapped for more than 20 minutes.

“I remember looking over and thinking oh God, he’s not moving. There’s nothing happening, and I look up and that’s one memory that I probably won’t be able to get rid of, and I instantly went, they’re going to call my grandma,” she said.

She immediately sent this text to her mother, saying, “You need to go to your mom’s. You need to stop what you’re doing and go. Now. 911 emergency,” said Santanna.

“They had to lift the semi completely off the ground as much as they could. The one guy goes, you’re going to hear a lot of like breaking, don’t freak out. They were there the whole 25 minutes. They were always like, are you okay, I’m like are you okay? I was like, yeah I’m okay, but I need out. Because the whole time it was like oh my gosh, you know you look over and he’s right there,” she said.

Santanna had ducked toward her grandfather when she saw they were going to hit.

But now, she’s trying to not think about that traumatic memory and focus on good times with the man she calls her best friend.

“He’s always been that for me. That one person that I knew that no matter what, if I needed something he’d be there,” said Santanna.