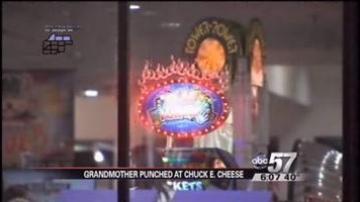 DEARBORN, Mich. -- A Michigan grandmother had to be rushed to the hospital, after a brawl at Chuck E. Cheese.

The woman's family says it happened Sunday in a Detroit suburb. The 50-year-old was at her grandson's 7th birthday party when she asked some people at a nearby table to clean up their language.

That's when family members say things got out of hand. A man jumped over tables and started swinging. The grandmother’s daughter said he even dragged her by her own hair.

The grandmother was taken to a nearby hospital and was treated for cuts to her face and mouth.