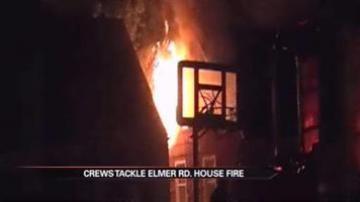 SOUTH BEND, Ind. -- Three children were rescued from a burning home on Elmer Street in South Bend around midnight.

Three children and their grandmother were inside the house when it caught fire.

Overnight they were given a place to stay from the Red Cross.

According to the grandmother, she smelled smoke inside the home, but couldn't find it. She then took the children outside and called the fire department.

"I had to scream for them to get up because the walls were cracking and they wouldn't get up and find the fire," said Kathy Mincey.

According to firefighters, flames were shooting out of the roof and north side of the home. They also said that there was a lot of smoke and water damage inside. However, they did say that if the family chooses to fix it, they should be able to move back to their home.

A report from the South Bend Fire Department states an electrical problem ignited the insulation in the attic, starting the fire. The fire was ruled accidental.

"I am kind of in a state of shock right now because my kids could have been hurt if it wasn't for my mom being there, or dead," said Chara Scott.