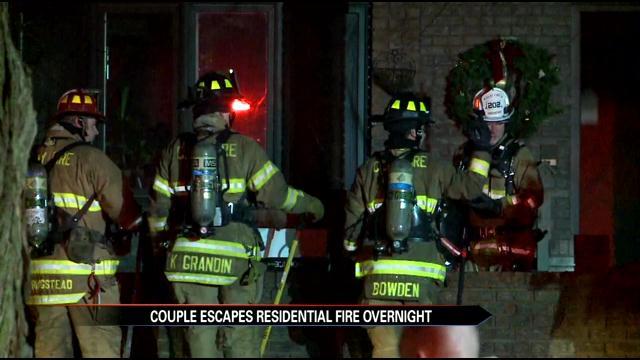 A couple in Granger woke up to flames inside their home Saturday morning. Ron Melser, the Deputy Fire Marshal for Clay Fire, says they were very lucky to have made it out in time.

“We got a call for a residence fire, a fire on the outside of the house. When we arrived their back porch was fully involved,” says Melser.

The call for help was at around 2:30 a.m. The Granger couple had a surprise awakening by a loud noise and discovered the fire.

“They both got out safely. They had working smoke alarms so that was good,” adds Melser.

The Clay Fire Department is only a half mile away.

"And luckily right here we have a fire hydrant. A lot of areas out here in the county there aren't fire hydrants. So it was nice to have this so we didn't have to bring water shuttle in. It makes it a lot easier," said Melser.

Fire crews were able to put out the fire in just 15 minutes.

“They got it under control pretty quick, especially how intense it was when we first pulled up. We were on scene within minutes of the call since it is right down the street but it was already through the roof on the rear end of the structure,” says Melser.

A cause of fire has not yet been determined but fire officials say there was significant damage. Because of the damage the couple will not be able to stay in their home.

Melser says the couple has insurance.

The couple escaped with two of their cats. Despite resuscitation attempts, a third cat did not survive.
Share this article: