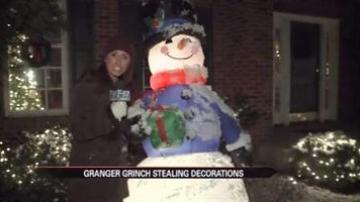 GRANGER, Ind. --  The Grinch is in town, the Granger Grinch that is.

In the last week, police said there have been thefts all over Granger. The robbers are stealing Christmas presents and even decorations.

The Christmas lights are lit in Granger, but not everyone is feeling the holiday cheer.

"They took three rather large presents out of the back of the car," said Cathy Rummel.

Rummel's gifts for her grandchildren were stolen by the Granger Grinch.

Rummel wasn't the only victim.

Police said even Frosty isn't safe from these thieves.

Warren said Granger is being targeted because of its large population, so now Rummel and the county police want to warn everyone in the area, so they do not wake up to their stockings empty.

"The wrappings make sure they can't be seen for people driving by," said Warren.

Carmon said this Granger Grinch did not steal Christmas from her, because she knows the true meaning of the holiday.

"Well, you get to spend time with your family and baby Jesus, that's why you celebrate it."