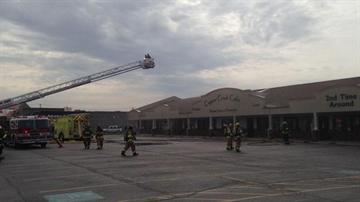 Firefighters said the fire started in the back of the building - in the kitchen.

Crews spent most of the day putting out the fire and hot spots.

George Tselios, the cafe's owner, said he doesn't know how long it will take to rebuild, but he's hoping to get back to business as usual as soon as possible.

"It's heartbreaking. I put a lot of blood sweat and tears in trying to put this place together, so to see something like this happen is hard," said Tselios.

"This is difficult because this is George and Pam's life here," said manager Dorothy Bouck.

Tselios opened the Copper Creek Cafe less than a year ago.

Tselios said it could take some time to get back up and running.

"Myself I have a family to take care of. Being out of work is going to be difficult. I can't imagine that George will allow that to happen too long," said Bouck.

Bouck was working at the restaurant when the fire broke out.

She said she directed customers out of the building immediately so no one was injured.

Her main concern is how her boss will cope with the loss of his livelihood.

"George and Pam they have a small family themselves and they are just trying to make a living like the rest of us," said Bouck.

The restaurant's employees are like family, Tselios said. He is worried about what they will do now.

"What do we do in the meantime? Not just myself but the rest of my employees. We all have bills to pay so I don't know," said Bouck.