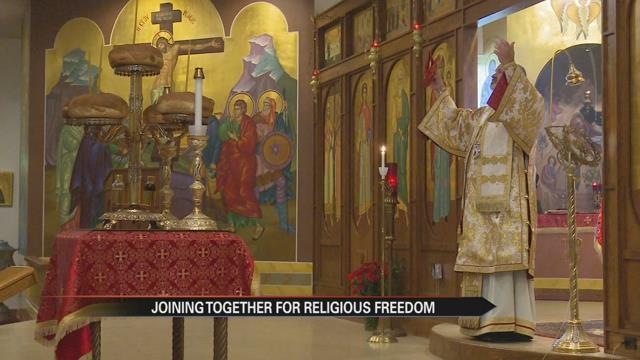 The Greek Orthodox Church in South Bend is working to convince Indiana to pass a Religious Freedom Resolution.

Ecumenical means ‘first among equals,’ so their leader is one of the people.

The resolution has broader, more global implications, however, related to the persecution Christians are currently facing overseas.

“If any other major Christian faith community was suffering the same persecutions in other countries, I would hope that others would come to their aid as well,” said Bishop Demetrios, the Chancellor of Greek Orthodox for the Metropolis of Chicago.

The Greek Orthodox Church is asking Indiana to support its Ecumenical Patriarch in Turkey.

“It is a very important resolution for us,” said the President of St. Andrew’s Parish Council.

Right now, the patriarch is not recognized as a worldwide leader. Legally, he’s just thought of as a Turkish priest, and thus not granted the same rights as the Catholic Pope, for example.

“There’s a movement now throughout our church in the United States for all the states to pass a similar resolution to put pressure on the Turkish government to ease up and to allow the freedom of religion to exist within our church in Turkey,” said Bishop Demetrios.

There are five points to the resolution:

So far, 45 states have passed it, including Illinois and Michigan, but not Indiana.

“So it’s no different than having any other religious leader threatened by outside forces, so it means a great deal to have the support of the U.S.,” said St. Andrew’s parish priest, Father George Konstantonopoulos.

The church also wants to raise awareness about the persecution Christians are facing in the Middle East.

“Radicalism is attacking Christianity at the home. People are being executed merely for being Christians. It’s a genocide,” said Bishop Demetrios.

The U.S. officially recognized the Christian genocide in Syria and Iraq earlier this year.

“This should hit home for any well-meaning human being. I think. I hope,” said Kirgios.

“I think we all need to care about one another. If we don’t help one another, and if we see this insidious persecution happening, it’s only a matter of time before that same  persecution happens to people like us, and then who will speak up for us?” said Bishop Demetrios.

The group proposing this resolution plans to bring it to Indiana legislators in early 2017.