Green bunnies could be medical breakthrough 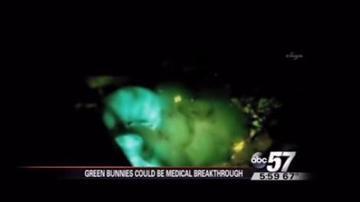 HONOLULU -- A team of researchers from the University of Hawaii and Turkey have successfully created a very special litter of rabbits.

In normal lighting, they look just like any other rabbit but under a black light, they glow green.

Scientists inserted some glowing jellyfish DNA into the bunny embryos, giving them that green glow.

"It's just a marker to show that we can take a gene that was not originally in the animal and now exists in the animal," said Dr. Joel Marh.

They are hoping the technique could be used to make new medicines and possibly make them cheaper.