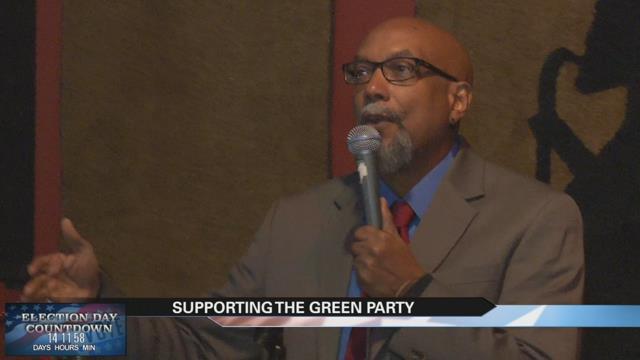 Ajamu Baraka listened to and spoke to voters at Chicory Café.

Many supporters say they’re tired of the two-party system.

“These candidates are not entitled to our votes. They should be earning them,” O’Brien said.

Many visitors at Chicory Monday shared similar sentiments, and listened carefully to Baraka.

“Voting for one or the other of the status quo parties is really not good enough in 2016,” Barak said.

These issues resonate with some former Bernie Sanders supporters.

“We are in fact a continuation from the Bernie Sanders revolution,” Baraka said.

Okereke is one of those former Sanders supporters.

“I did vote for Bernie. He didn’t quite make it so I definitely made it over to the green party as soon as I found out who they were,” Okereke said.

“We’re not giving up,” Baraka says.

While he likely won’t get elected as Vic President, he says it’s about voices like those in Michiana, coming together to build something new in an old system.

“Anytime we’re able to expand democracy, in this country, any time we are able to raise questions of social justice, and to talk about defending human rights, we in fact win,” Baraka said