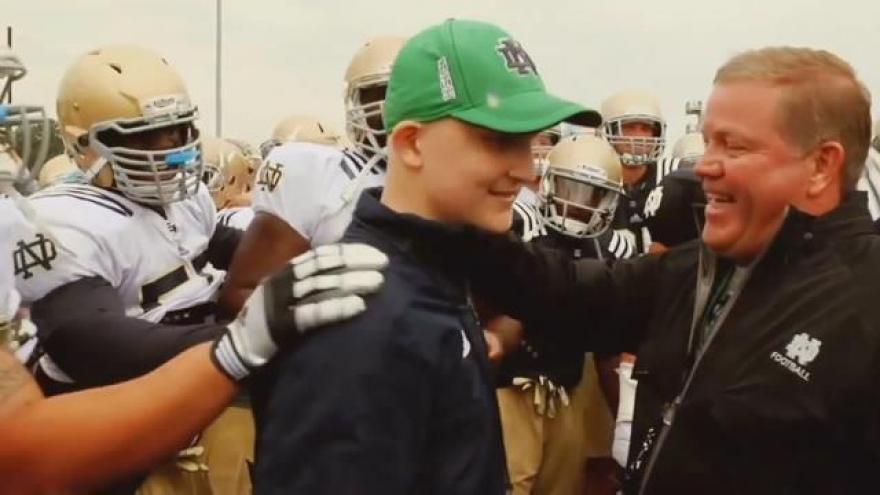 Growing up, Sam Grewe made all the plays, on all his teams, as often as he could. He was the star athlete in everything he did.

During his 7th grade football season, began to feel a pain in his knee that continued to worse until his parents took him to the hospital. Christmas Week 2011, the doctors delivered the news, cancer.

"I knew what cancer was but I didn't know what happened when you actually get it, I never really anticipated it would happen," Grewe said.

Grewe was diagnosed with osteosarcoma, an aggressive malignant bone cancer. He had part of his right leg amputated (from just above his knee down to this ankle). His ankle became his knee, and his foot was rotated and acted as a shin bone. He uses a prosthetic leg to get around these days.

With his athletic dreams on hold, the Notre Dame Football Team adopted Grewe into its team during their 2012 national championship run.

"That was the first huge step in me getting back to athletics," Grewe said.

Little did he know that was just the beginning.

Four years later, Grewe began his junior year searching for a new sport with his new leg, he chose the high jump.

"I had no idea what I was doing," Grewe said.

But he quickly grew into the sports. Going from the track and field at Northridge High School in Middlebury, to the Olympic Trials in Charlotte, and before you knew it, he was on his way to Rio for the 2016 Paralympic Games

"So much excitement, I think that was the moment like wow this is really happening, I'm representing the U-S-A," Grewe said.

A moment only a few experience.

"There were 30,000 people crammed into that end of the stadium all cheering, I had never jumped in front 1000 people hardly before that," Grewe said.

A kid who experienced so much in his life, shaping and teaching him what it takes to be successful.

"Never let your fear decide your fate because there were times going through treatment where I was close to death, I was scared but I fought through that. After that I didn't have a leg, I was scared, didn't think I would walk again, I fought through that and I'm up running now," Grewe said. "The biggest takeaway is that through times of hardship when fear comes, you just got to push through and things will work out."