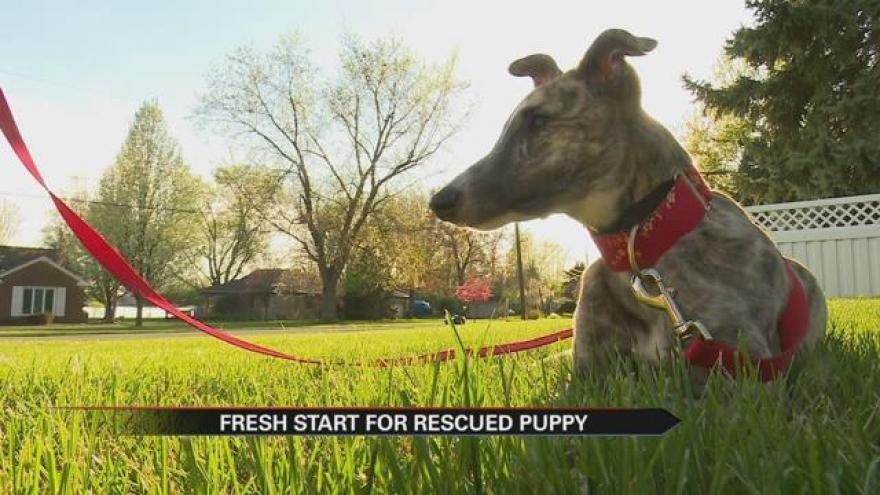 One Greyhound puppy traveled all the way from Beijing to Kosciusko County after being rescued from the Chinese dog meat trade. Now, his foster parents are hoping his story will inspire others in Michiana to take action.

“This is Pang Pang, and Pang Pang came to our rescue from China. His mom actually was being sold into the dog meat trade that’s happening in China,” said a foster coordinator for the organization, American Greyhound, Stephanie Jones.

According to the International Humane Society, 10 to 20 million dogs are slaughtered for people to eat each year in China.

Thanks to the organization Duo Duo, which is working to end China’s dog meat trade, Pang Pang escaped that statistic by hopping on a flight all the way from Beijing to small town Warsaw, Indiana, where he found shelter with American Greyhound.

“He’s actually only the second greyhound to come to the United States from the dog meat trade. There was one that came to the Chicago area, and her name was Hui Hui,” said Stephanie.

The International Humane Society reports that nearly 70% said they had never even tried dog meat as of 2016.

“Dogs are meant to be our companion animals. That’s what nature over the past however many thousands of years has taught them to do, and companions aren’t typically something that we eat,” said Jones.

She’s hoping his story inspires others to act.

“We want Pang Pang to help all the other greyhounds… We need him to kind of help us help them,” said Jones.

Pang Pang will become part of a new family in Wisconsin in June.

Stephanie says that her organization, American Greyhound, rescued around 130 dogs last year, but they are looking for more people to help foster dogs.

Check out these links to see how you can help: