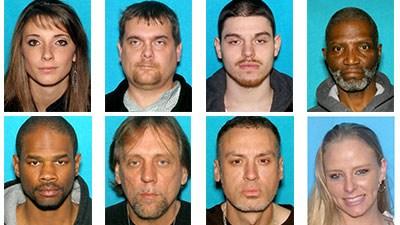 Indiana State Excise Police Officers arrested eight people in connection with a counterfeit pull-tab operation that spanned 10 counties in Indiana. A ninth suspect is being sought.

According to Excise Police they executed search warrants at two homes in Fort Wayne on Monday.

Three people were arrested throughout Fort Wayne Monday, three were incarcerated on unrelated charges and two were arrested Tuesday morning.

Those who face charges include:

According to Excise Police, pull tab tickets were being counterfeited, then redeemed for cash at bars in Allen, Steuben, Wells, Adams, Huntington, Howard, Tippecanoe, St. Joseph, Elkhart, and Marion counties.

The group also allegedly attempted to redeem $7,648 worth of counterfeit pull tab tickets, but were unsuccessful.

The cases will be prosecuted in Allen County.

Milhem is also facing one count of impersonating a police officer. He allegedly went into the Eagle's Lodge on North Main Street in Goshen on November 20, 2014, showed a badge and said he was an Excise Police officer.

If you believe you redeemed a counterfeit pull tab ticket, contact the Indiana State Excise Police's Columbia City district at 260-244-4285.