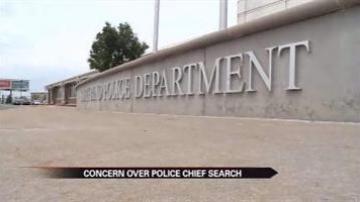 SOUTH BEND, Ind. -- A community group alleges the search for the next chief of the South Bend Police Department is not transparent enough. They’re also upset that all the internal candidates have allegedly been rejected.

Members of the community activist group Citizens United for a Better Government are calling South Bend’s Mayor Pete Buttigieg out.

"We've tried to give the mayor a pass and believe that he was going to be a man of his word and conduct a transparent search,” said Mario Sims, President of Citizens United for a Better Government.

But according to Buttigieg’s Chief of Staff Mike Schmuhl, there has been plenty of transparency.

In a written statement, Schmuhl wrote the "Process included input and oversight from community and policing leaders and many people attended the Town Hall Forum that was sponsored at the KROC Center."

Over the last few weeks, ABC7’s Jason Aubry has received tips from sources inside the police department that several captains were interviewed by phone, including Brian Young.

"Brian Young has made the finalist list, or at least was interviewed, which is absolutely absurd considering the fact that he has admitting to being on the tapes,” said Sims.

Young is one of the officers suing the city over the tape scandal.

When asked if he was interviewed for the job, Schmuhl responded with this statement, "As for information on the applicants themselves, I would feel uncomfortable releasing that information because this is a hiring process that is sensitive in nature."

He would not confirm, nor deny, if Young was interviewed for the job.

Members of the police department have told Aubry that all internal candidates have been eliminated from consideration for the position.

That's something Citizen’s United wants the mayor to reconsider.

"We believe that there are officers in there that deserve our support. Scott Ruszkowski is one of those that, unilaterally, people have said this man is a good man. I think that he can bring integrity to the leadership of the South Bend Police Department,” said Sims.

According to Schmuhl, the search for a new chief is on track and the names of the finalists will be released soon.

When this all started, it was reported that twelve candidates would be selected for phone interviews.

Six or seven of those candidates would then come to South Bend for in-person interviews.

Then three or four of those would be asked to return as finalists.