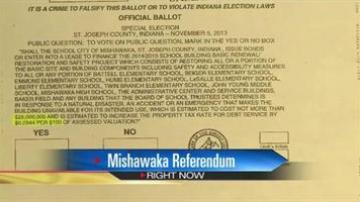 MISHAWAKA, Ind. -- A $28 million referendum is on the ballot to help fund Mishawaka schools. There are at least two Political Action Committees on both sides of the issue.

This week a Political Action Committee filed their paperwork with the St. Joseph County Clerk opposing the referendum.

On November 5, Mishawaka residents can vote yes or no to fund $28 million in school improvements.

Superintendent Terry Barker says its money they need to do basic upkeep.

If it passes, Mishawaka property owners will be the ones footing the bill.

He argues that a yes vote will increase property taxes by 34 percent, which he says is too much of a hike for Mishawaka homeowners.

In a political committee receipt report from the Friends of Mishawka Schools, it shows that St. Joseph Valley PHCC gave $7500 in support of the referendum.

We went to the office of the St. Joe Valley PHCC, but the office was closed.

We contacted President Charlie Watterson Jr and he gave this statement in support of the referendum.

As a 60 year old Association of mechanical contractors employing over 400 highly skilled local journeymen and apprentices, St Joe Valley Association of  Plumbing, Heating, and Cooling Contractors, recognizes the high value in first class schools in the Mishawaka area.  We rely on well trained young men and women in the Mishawaka area to fill the skilled positions that we offer.  We feel that world class learning environments for our children are essential to the success of our industry.