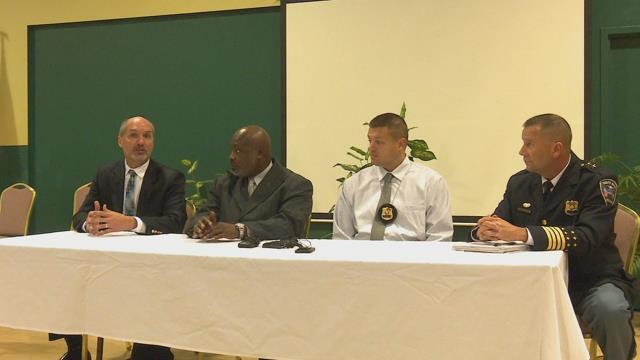 The goal first and foremost is to reduce gun violence in South Bend, but the group has also been turning the lives around of some of the men attending.

“I want to sit and talk to somebody over a barbeque or a birthday party, not over a crime scene,” South Bend Police Chief Scott Ruszkowski said.

That mentality is why Group Violence Intervention was formed three years ago.

South Bend Police, the St. Joseph County Prosecutor’s office and more than 70 social services team up to steer gang leaders away from violence.

“Put the guns down, to stop killing each other,” Isaac Hunt of Goodwill Industries said.

Men who are known to be influential in local gangs are required by their parole or probation officers to attend a meeting, called a “call in.”

“They sit and they listen,” Ruszkowski said.

Law enforcement and the prosecutor then tell the men they have a chance to influence their gangs in a positive way, encouraging their friends to stop violence.

“Stop pulling the trigger. You don’t get a do-over. It’s final,” Ruszkowski said.

In addition to its goal of reducing gang violence, the group has also begun to turn the lives of its participants around.

This year, 26 men have gotten jobs through the program.

At least five have started school again because of it.

Those who do get jobs are also likely to retain them.

Six men from Wednesday’s session have already reached out to take advantage of these services.

While they’re beginning to see success stories, the intervention leaders say it’s not time to celebrate, but to work harder, until gun violence in south bend becomes completely obsolete.

“We want to continue this going on forward and making it better and we look for the support from the community,” Hunt said.