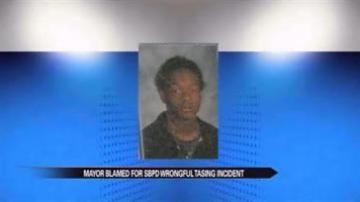 SOUTH BEND, Ind. -- South Bend Police are accused of barging into a home on East Bowman Street and tasering the wrong man. ABC 57 first aired the story with the Franklin family and after watching our story A citizen’s group said South Bend Mayor Pete Buttigieg should be held responsible.

"We saw a news story this week so we wanted to look into it,” said Mario Sims, President and CEO of the group (CUBG) Citizens United for a Better Government.

After Sims and other members of Citizens United for a Better Government saw the story on ABC57 News, they reached out to the Franklin family.

Police say Jones was actively involved in a domestic case and was seen running near the Franklin's Bowman St. home.

The Franklin's say Jones doesn't live there anymore- but the police found the couple’s 18-year-old son DeShawn sleeping in a bedroom and thought he was the man they were looking for.

“They went into my son’s room and tased him and hit him, but he was asleep in his bed,” said Vivian.

"Mr. Franklin said he saw them punch him in the jaw and then tase him twice. Then after a few minutes they determined he wasn't even the person that they were looking for," said Sims.

"They just said they were sorry and they went on out the door,” said Vivian.

"We do not have any confidence in the mayor’s office to administer justice in this city,” said Sims.

So now Sims and members of CUBG are asking the common council to oust the mayor.

"We had almost 4 months from the city to take some sort of disciplinary action against these officers,” said Sims. "We've heard no investigation, no officers being disciplined. Matter of fact you can't even access the report."

Which is true. ABC 57 News spoke to the SBPD Public Information Officer Phil and he confirmed they do not hand out copies of case reports. However, ABC57 News was able to get a copy of an initial report compiled by one of the officers that was on the scene that night. In the report he states, "In an attempt to avoid a physical fight I deployed my Taser, but it was ineffective as only one probe made contact with DeShawn. At this time DeShawn lunged at Ptl. Mentz and me."

In order for the taser to work, police say both prongs must be deployed.

As for why they thought the suspect was at his parents' house, earlier in the report the officer states the following: "At this time another officer arrived in the area and set up a perimeter. K( Officer Dawson arrived on the scene and used his partner to began tracking Jones. We headed south into an alley (where Jones had been last seen) and then west into a connecting alley. We headed west for almost two blocks until the K9 lead us to the back door of 910 Bowman."

CUBG is upset the Franklin's have not been able to gather any information about whether the officers have been disciplined for their actions.

Captain Trent said he can't comment on the case because it is intertwined with the domestic dispute case. As for disciplinary action he said the situation is ongoing and it is yet to be determined if the Board of Public Safety will address the conduct of the officers involved. However at this point they have not.

ABC 57 contacted the Mayor's officer to find out if Mayor Pete Buttigieg is aware of this incident and if he had a response to the CUBG's request for the South Bend Common Council to vote on the his confidence to run the city and the ongoing Police Chief search.

Late this afternoon they issues the following statement: "The Mayor's Office is aware of the incident. The matter is being investigated and will be before the Board of Public Safety soon. In response to a vote of no confidence, there's already a vote every four years- it's called Election Day. The City administration and Common Council are hard at work on completing the budget for next year and working on public safety, vacant and abandoned housing, economic development, and municipal services for South Bend residents. Mike Schmuhl, Chief of staff.