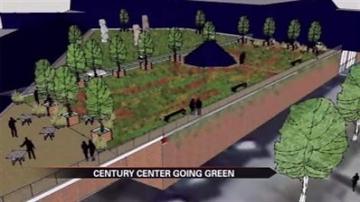 SOUTH BEND, Ind. -- The Century Center is one of south bend's most prominent buildings and in one year, it could also be one of the greenest buildings. It is set to get some major renovations, including a new roof.

Greening the Bend is working with the Century Center board and the City of South Bend to build a green roof above the South Bend Art Museum.

Project leaders say it has economic, social and environmental advantages for the city.

"What we're looking to do here is to put a green roof on the structure behind me. It's right above the Museum of Art,” said Jonathan Burke, Director of Municipal Energy Office for City of South Bend.

The $300,000 proposal would fill in a rocky section of the roof with trees and plants that are drought resistant and low maintenance.

"One of the unique things about this project is that it would also be a pedestrian accessible green roof, so people can actually go out and enjoy the roof and walk around and see the roof in action,” said Burke.

The will plants not only reduce storm water runoff, but they're also projected to save about $1200 in energy costs.

The only big obstacle remaining for project is to raise the $300,000 needed to build the garden.

None of the money will come from taxpayer dollars so the fundraising is already underway.

"If you want to enter the rain barrel raffle or go to the Rain Barrel Ball or be a title underwriter, there's a place for everybody to help out with this project. So it's going to be a real community effort to get this project done and we will get it done,” said Petitjean.

Right now the project is in the fundraising stages, but managers are hoping to have the project finished by this time next year.