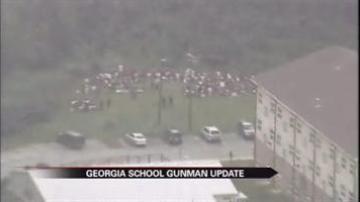 ATLANTA — A 20-year-old man is in jail after police say he terrorized an Atlanta-area elementary school Tuesday.

Officials say  that the man, armed with an AK-47, slipped into the Ronald McNair Discovery Learning Academy and threatened to kill everyone.

After exchanging gunfire with officers, police say a school clerk talked him into surrendering.

"He had a look on him that he was willing to kill and matter of fact, he said it," said Antoinette Tuff. "He said he didn't have any reason to live and that he knew he was going to die today."

The suspect gunman has been identified as Michael Hill.

He was arrested earlier this year for alleged terrorist threats and acts. He was sentenced to probation and anger management.