Gunman fires into group of people outside of a gas station 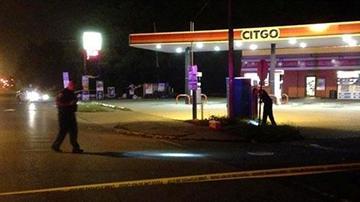 SOUTH BEND, Ind. — Police in South Bend are investigating an early morning shooting near Bertrand and Olive Street. Police were called to the Citgo gas station just before 4 a.m. on Wednesday.

Police say they’re called to the area nearly every day.

Police are familiar with the Citgo station, the scene of Thursday morning's drive-by shooting.

When we showed Captain Phil Trent of the South Bend Police Department iPhone video of Eric Steltzer Thursday morning covering the shooting, you can hear what sounds like gunshots in the background.

We asked if that’s what it was.

"I wouldn't doubt it,” said Trent.

According to police, a group of people had gathered outside of the gas station when someone began firing into the crowd from a vehicle.

“When we arrived we found an injured party down in the parking lot, it was immediately thought that he was suffering from a gunshot wound, Upon further examination it was determined that he was struck by a vehicle,” said Trent.

Police say when the shots rang out, people dropped to the ground to avoid the bullets.

"It looked like a bunch of young guys, young kids over there last night,” said neighbor James Medlin.

At least three of the bullets struck a woman's house.

One of the bullets went through the exterior of the house, through the wall, through a picture frame and into a bedroom where two children were sleeping.

Another bullet entered her house inches away from where she was standing looking out her kitchen window.

The third bullet that police found came through her kitchen cabinet and ricocheted into the kitchen wall.

Many of the nearby residents have had similar incidents.

"I just went to bed and they shot and it went through my bedroom window about I say about this far from my head,” said Medlin.

The man who was struck by the vehicle suffered serious head injuries.