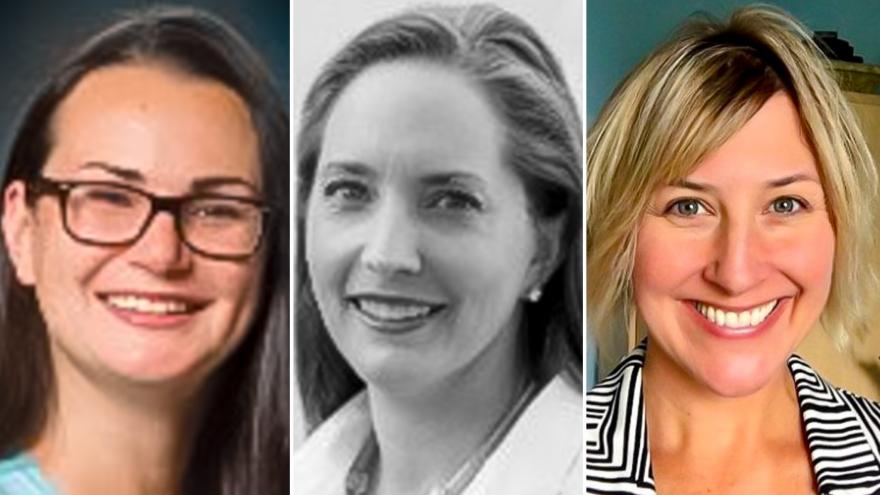 (CNN) -- A gunman in a standoff at a Northern California military veterans home -- which ended with the deaths Friday of three women who worked for a counseling program -- had previously threatened one of the women, two law enforcement sources said.

Police officers Friday evening stormed the room where Albert Wong had taken the hostages at the Veterans Home of California in Yountville eight hours earlier, and found the hostages and the gunman dead, authorities said.

The victims -- Christine Loeber, 48; Jennifer Golick, 42; and Jennifer Gonzales, 29 -- worked at the Pathway Home, a nonprofit that operates at the larger facility and helps post-9/11 military veterans reintegrate into civilian life, including by counseling clients with post-traumatic stress disorder, officials said.

"This is a tragic piece of news, one that we were really hoping we wouldn't have to come before the public to give," said Chris Childs, assistant chief of the California Highway Patrol's Golden Gate Division.

Authorities didn't give a motive for the gunman's actions.

Wong, 36, of Sacramento, used to be a client at the Pathway Home, authorities said. He left the program two weeks ago, state Sen. Bill Dodd said, without elaborating.

But two the law enforcement sources, speaking to CNN on condition of anonymity, said Wong had threatened one of the women. Wong was kicked out of the program because of that threat, one of the sources said.

Details about the threat and when it was made weren't immediately available.

Wong had been honorably discharged from the US Army, and was armed Friday with at least a rifle and a shotgun, one of the sources said.

Wong and a sheriff's deputy exchanged gunfire early in the standoff, and before officers entered the room they spent hours trying to contact him, authorities said.

'They were having cake'

The chaos started when the gunman barged into a going-away party for some departing Pathway employees Friday morning, according to Larry Kamer, who said his wife, Devereaux Smith, works there.

"They were having cake and toasting. Apparently he just walked in with this rifle," Kamer said. He said his wife and other employees managed to escape, though he didn't say how.

"Said he was very calm," Kamer told CNN affiliate KPIX in San Francisco. "And when she had the opportunity to go (with others), they got out as soon as they could."

As the gunman held the hostages in a room inside the building, authorities tried to make contact and at some point exchanged gunfire with him.

Parts of the wider facility were locked down during the standoff. About 70 high school students who'd been practicing a musical inside a theater on the grounds of the veterans home were safely evacuated, authorities said.

It's unclear whether the gunman chose the women at random, police said. But they all worked at the Pathway Home, which operates an independent 35,000-square-foot center within the Yountville veterans home, the largest such home in the country.

Loeber was the executive director of the Pathway Home, and Golick was a staff psychologist and clinical director there. Gonzales was a clinical psychologist with the San Francisco Department of Veterans Affairs Health Care System.

"These brave women were accomplished professionals who dedicated their careers to serving our nation's veterans, working closely with those in the greatest need of attention after deployments in Iraq and Afghanistan," the Pathway Home said in a statement.

Loeber had been hired to direct the Pathway Home in 2016, the program's website says, as it was transitioning from a group that focused primarily on housing and treating veterans with PTSD into a program with a wider mission, including helping vets with academic and career development.

"We are focused now on early intervention, helping these veterans to reintegrate successfully," Loeber once told the San Francisco Chronicle in an interview. "The Pathway Home is a program that builds community, that teaches coping skills, that helps individuals understand their symptoms and helps them to successfully complete school and stay on track."

Its staff of 18 people has treated more than 400 veterans since 2008. Male veterans enrolled in the live-in program are mostly soldiers returning from the Iraq and Afghanistan wars who have difficulty transitioning into civilian life.

Dozens of returning veterans have graduated from the program, including Adam Schumann, the subject of the book and Hollywood film "Thank You For Your Service" starring actor Miles Teller.

The program was featured in a 2016 PBS documentary, "Of Men and War," which followed clients and their families for five years as they dealt with the effects of veterans' traumatic memories.

Flags at state Capitol to fly at half-staff

"Our hearts go out to their families and loved ones, and the entire community of Yountville," Brown said in a statement.

The governor has ordered flags at the state Capitol in Sacramento to fly at half-staff in tribute to the victims and their families.

The Veterans Home of California and all its programs, including the Pathway Home, are an important part of the Napa Valley community, with the 1,200-seat theater, a golf course and a large library, the California Department of Veterans Affairs said.

Yountville is a town of about 3,000 residents in the north San Francisco Bay Area.