Guns allowed at the polls 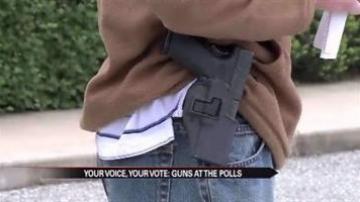 SOUTH BEND, Ind. -- During the primary election, a local man was not allowed to vote because he was carrying a permitted firearm. This year, he’ll be allowed to vote – and will be carrying his sidearm.

The 1,400 poll workers were trained to make sure everything goes smoothly.

"Every year there is something new in state law that changes how the election happens,” said Winn.

Changes to state gun laws slipped through the cracks earlier this year and caused quite a problem.

"St. Joseph County was sued following the primary election because we did not let a voter into the polling place who was carrying a side arm,” said Winn.

That voter was Clay Edinger. At the time he didn't want his face shown.

"I asked for clarification, what law is it that prohibits me from doing so?" said Edinger in May 2012.

Workers couldn't give him an answer and turned to the election board.

"There was a call about that, so the election board did respond; Unfortunately, we responded incorrectly,” said Winn. “We were not aware of the law and so we were remiss in that we were not giving them the correct advice when they called us."

Ultimately, Edinger did not cast his vote in the primary election, but he brought the issue to light.

This fall, poll workers were retrained on how the new law works.

Edinger said he will cast his vote in Tuesday presidential election and when he does, he will be wearing his gun on his hip.