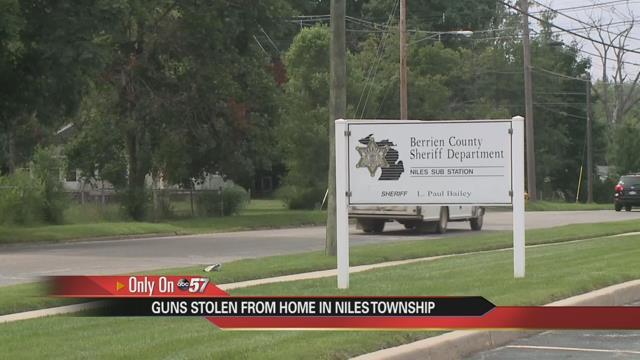 Three guns registered to a reserve cop were taken during a home invasion near Niles. Police said it happened in the 2100 block of Spansail Drive between July 1st and July 7th.

Kevin Greenlee is asking the public for help finding suspects so that they might get back some of their families prized possessions.

Greenlee said, “My daughter came home after being away for the fourth and the back door was kicked in, so she immediately called 911.”

Greenlee said he's used to visiting crime scenes, but not one that revolves around his daughter.

Greenlee said, “She called, before the police even arrived here to let me know. She said 'Dad when I got home, the back door had been kicked in, the place has been robbed.'”

Officers with the Berrien County Sheriff's Department are actively investigating and this is the Crime Stopper's crime of the week.

Greenlee said, “My daughter had a lot of her valuables in a safe, a fireproof safe, and they just took the whole safe.”

Greenlee said the three guns that were taken are registered to him.

Greenlee said, “There was an automatic 9-milimeter, a 38 special revolver, and a shotgun.”

Greenlee is willing to offer an additional $500 award on top of the Crime Stopper's reward in this case.

Greenlee said, “I know that police don’t like stolen hand guns floating around.”

On Thursday he had his tools handy and was working to make his daughter's home safer.

Crimestoppers is offering a $1,000 reward for tips that lead to an arrest in this case.