Gunshots in Goshen lead police to string of car thefts 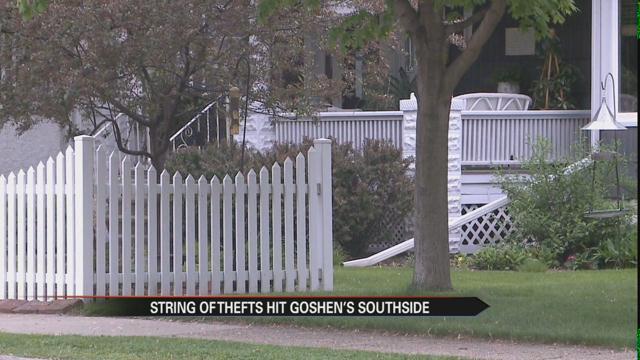 Police in Goshen are asking victims involved in a crime spree, come forward, and help them build a case against the suspects they believe are responsible for a string of car thefts.

Police say the crimes happened in the Historic Southside neighborhood of Goshen.

“Everyone is friendly and everyone looks out for everyone else,” says 94 year old Helen Kornblum.

Kornblum has lived in her home off 7th Street for 47 years so when she heard a string of car thefts happened early Wednesday from 5th to 9th Streets across six blocks, she was shocked.

“It isn't something that happens,” says Kornblum.

But what was more surprising than car thefts were the sounds Tiffany Elliott reported that same morning.

Elliott says following a boom then a flash of light she was able to see suspicious men at the railroad tracks across from her home.

“When the fourth shot went off me and my dad was on the porch out here and from the flash of the shot we seen three sets of legs on the other side of the tracks,” says Elliott.

“Later the cops came back saying they caught six guys and one of them had a weapon on them,” says Elliott.

Even though gun shots scared Elliott the neighborhood remains quaint in her mind.

Police say the investigation is ongoing and they cannot provide details on what was stolen or who the suspects are. They ask that if you have any information regarding the case you share it with police.
Share this article: