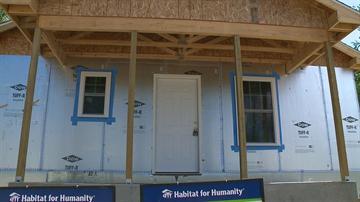 SOUTH BEND, Ind. – Thieves raided a Habitat for Humanity of St. Joseph County’s home build in South Bend this week. Organizers said $2,000 worth of siding was stolen from its site on West Irvington.

Greg Chipman, the Director of Construction, said the crime must have happened between Thursday and Tuesday.

"Unfortunately when we came over here yesterday (Tuesday) to start prepping for the siding we noticed that all our siding had been stolen," said Chipman.

He said it was enough grey siding to cover the entire home.

"They pretty much cleaned us out, the only thing that we saw when we came in the morning are tire tracks backing up to the garage," said Chipman.

Chipman said the thieves left behind footprints along with the tire marks.

He said there must have been two people there to load the siding, since there were two separate prints.

While this is upsetting for the entire organization, Chipman said the worst part is that the material was stolen from the community.

"They not only stole from Habitat, but they stole from the community because this is material that was donated," he added.

Habitat said its hoping to get new siding delivered this week, and the project should not be slowed down.

The project’s name is the Ellis Family Build, and a single mother and her children will be moving in once the house is complete.

The site is also this year’s "Rock the House" project where a number of different area schools volunteer their time to the build.

If you’re interested in making a donation to help replace the stolen material you call the Habitat Office at (574) 288-6967 or visit its website at http://www.habitat-for-humanity.org/.