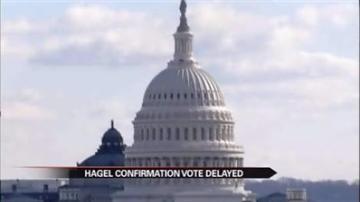 The nomination of former Senator Chuck Hagel as the next US defense secretary is on hold for now.

Thursday, republicans stalled a vote for Hagel's confirmation. The Vietnam veteran seemed like a sure pick on paper, but now republicans want more information on his financial records.

The republican party is particularly interested to see what groups he has taken money from over the last five years.

That means another week or so in office for outgoing defense secretary, Leon Panetta.

The senate is in recess next week. A final vote on Hagel's nomination is expected on Feb. 26.