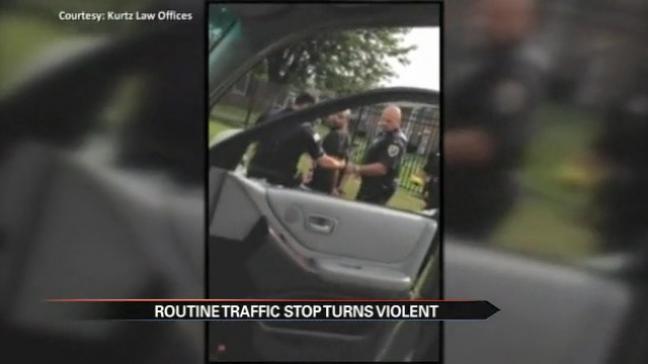 Hammond Police are being investigated for using excessive force after pulling a car over for a seat belt violation.

On September 24th, police broke the window of the vehicle, and passenger Jamal Jones was tazed, forced to the ground, and cuffed.

In the back seat, a 14-year-old recorded the incident on his cell phone.

The driver of the car can be heard in the video asking if the incident was being recorded, and saying she has children in the car.

The couple's attorney Dana Kurtz says this is a case of senseless police brutality, saying the driver, Lisa Mahoom, was taking her family to visit a sick family member.

Before the tazing occurred, officers had drawn their guns.

“I'm not making it worse, I'm scared for my life because he just pulled a gun on us. I don't have a gun!” Mahoom is heard saying.

This video is the latest in a string of police using excessive force and being caught on camera.

On September 4th, a driver in South Carolina was shot several times at a gas station after reaching into his car for his ID.

In October 2013, a minivan with children inside was pelted by police officers in New Mexico.

Hammond Police issued a statement saying Jamal Jones refused to exit the vehicle after several requests, saying they “feared the occupants of the vehicle may have possessed a firearm, and seeing the passenger repeatedly reach toward the rear seats of the vehicle.”

“He's looking for information in his bookbag. When he's digging through the bookbag, they pulled a gun out. What's the purpose of a gun?” says Mahoom.

Kurtz says two of the officers involved have had prior lawsuits, including using excessive force.

The couple have now filed their own lawsuit to make sure it does not happen again.