Harbaugh hoping for first win in The Big House 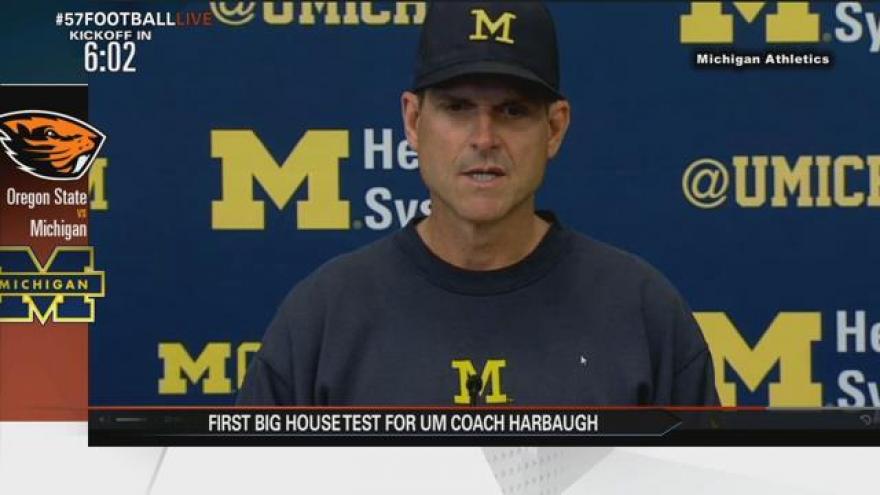 Saturday's University of Michigan game against Oregon State will be Head Coach Jim Harbaugh's first game in The Big House after taking the spot at his alma mater.

Coach Harbaugh is still bitter about losing his first game as head coach at Michigan.

He says he’ll be in a better mood once he gets a win under his belt.

“It’s a bad taste in our mouth when you lose a football game and there’s only one mouthwash for that and that is winning a football game, so that’s what we’re going to make darn sure of what we focus on," Harbaugh said.

Harbaugh is passionate about bringing relevancy back to The Big House.

The Wolverine's new head coach is a former quarterback who finished his time at Michigan as the all-time record holder for passing yards.

This week, the only thing he hopes to gain is a win, but there's one guy who thinks he can stop him.

“You’ve got to take advantage of opportunity when opportunity knocks. So it will be a tremendous challenge," Gary Andersen, Oregon State Head Football Coach said.

Andersen is ready to stand up to the big bully in The Big House.

“You better put on your big boy pants for this one, because if you don’t you’re going to get run right out of that stadium," Andersen said.

At least he's looking ahead.

“Some people walk right out of the locker room and they’re over it. I’m not one of those guys. It stays with me, and I choose to have it stay with me. And in the mindset of our team it will stay with us," Harbaugh said.

Coach Andersen says Oregon State's players got to Ann Arbor a day early to handle the time difference and he doesn’t see it being a problem.