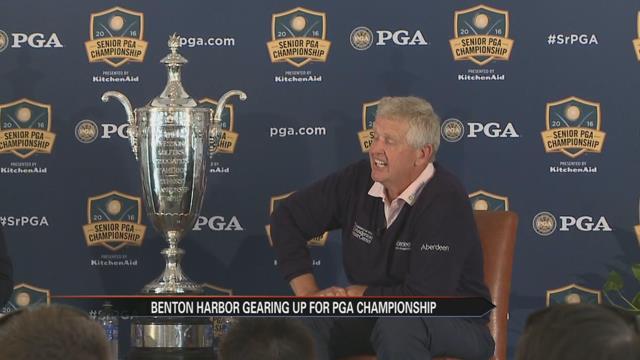 Media Day for the 77th Senior PGA Championship was held at Harbor Shores Monday, highlighting the impact the event has on the local economy.

“It’s a showcase,” Mike Todman, general chair of this year’s tournament, said. “And it allows people to see what St. Joe [and] Benton Harbor has become and what all the opportunities are that are here.”

Those opportunities now include hosting some of the world’s top golfers.

Defending PGA champ Colin Montgomerie attended Monday’s media event, talking about his career and how he’s prepping to shoot for a third straight victory at the tournament.

He even spoke about his love, and every golfer’s affinity, of Harbor Shores.

“We all love it here and what you do in the community is fantastic,” Montgomerie said. “It’s great to be here again.”

Todman said the event, and Harbor Shores itself, represents a growing strength within Benton Harbor.

“A number of years ago, before this tournament, this was [a] landfill and it wasn’t a place that you’d want to come to see,” Todman said. “And now, people come here and it’s kind of a fun, hip place!”

And though the shiny trophy and the celebrity athletes offer a spectacle of sorts, Todman said what matters most is making this part of southwest Michigan more appealing.

“If people want to live here, then they’re willing to invest here,” Todman said. “So, if companies and businesses see this is a great place to live, guess what, they’ll visit; and that’s what we’re finding.”

“To have people from all over the world coming to little, ole Benton Harbor, Michigan is a wonderful, wonderful thing,” she said.

One of the many ways tournament officials are using the event to help the local economy is by setting up a community showcase near the entrance of the club.

“We will have tastes of wine, beer, chocolate and cheese from local purveyors,” an official said at the media event. “We’ll have music from the citadel [and] art from different art galleries around.”

There will also be a bunch of local food trucks stationed throughout the club, and hundreds, if not thousands, of fans and tourists checking out not only Harbor Shores, but a ton of local restaurants and shops.

The tournament begins May 24.