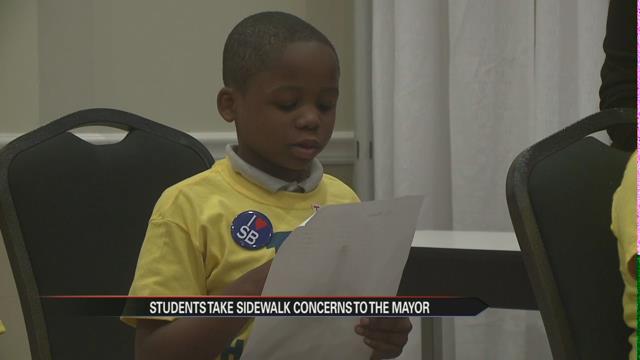 A group of South Bend elementary students left the classroom for the board room Thursday and had a big meeting with the mayor.

Students at Harrison Elementary School were really concerned about the rundown sidewalks near their school.

So, they took action and called a meeting with the mayor.

He was impressed by their research and hard-work, so much so, that he vowed to fix the problem by this time next year.

"We need to have a safe route to school for our walkers and our special education students," said third grader Samantha Aguirre.

Aguirre was one of many students looking for change.

Her mother and father along with several parents say their walks to and from Harrison on the city's west side are starting to become hazardous.

So the school started working on a proposal geared toward improving the neighborhood all while teaching the students math.

So these students spoke and the mayor listened.

“You can tell especially for the age they are, first through fourth graders, they really put a lot of energy and a lot of thought into this idea," said Mayor Pete Buttigieg.

And for their effort, a promise of change these students can be proud of.

“We're getting more than $1 million in federal investment to make that area around the school safer and more accessible," said Mayor Buttigieg.