Harvey aftermath: Texas governor says 'worst is not yet over' 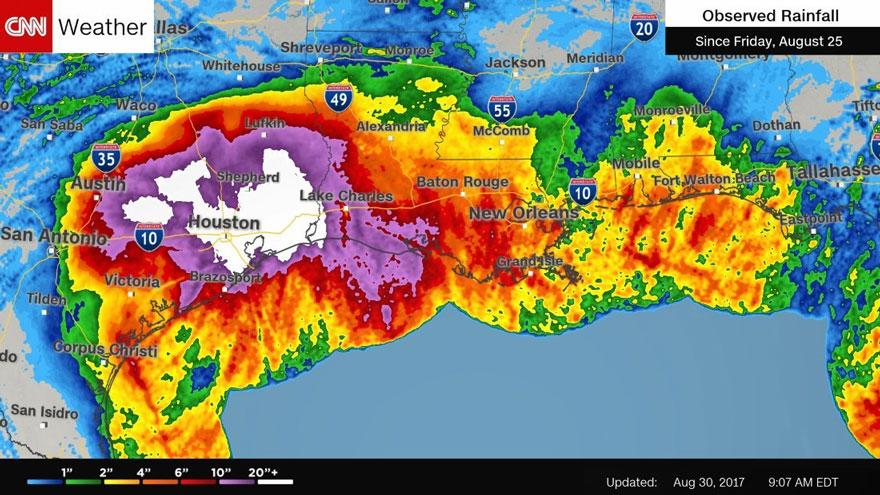 The unrelenting storm unleashed its wrath on a wide swath east of Houston, leaving thousands stranded in flooded homes and forcing the evacuation of a nursing facility and even an emergency shelter where residents had sought refuge.

"Our whole city is underwater right now but we are coming!" Port Arthur Mayor Derrick Freeman posted Wednesday on Facebook. "If you called, we are coming. Please get to higher ground if you can, but please try (to) stay out of attics."

At least 28 deaths related to Hurricane Harvey and its aftermath have been reported in Texas. One of them, Houston police Sgt. Steve Perez, drowned while trying to get to work.

"To those Americans who have lost loved ones, all of America is grieving with you and our hearts are joined with yours forever," President Donald Trump said in Springfield, Missouri.

"The worst is not yet over for Southeast Texas as far as the rain is concerned," he said.

In Beaumont, rescuers Tuesday afternoon came upon a toddler in a pink backpack clinging to her mother's body in floodwaters about a half mile from their car. The mother was getting out of her car when she stepped into a canal, Mayor Becky Ames said.

The girl was in stable condition with hypothermia.

"Had we been a few moments later, they would have been swept underneath (a trestle) and our boats wouldn't have been able to get them," Haley Morrow, spokeswoman for the Beaumont Emergency Management Office, told CNN on Wednesday.

"A true testament of a mother who put her own life at risk and sacrificed her life to save her child. That was devastating."

In Port Arthur -- about 90 miles east of the devastated Houston area -- the deluge was so severe that floodwaters overwhelmed the Bob Bowers Civic Center, which was serving as a shelter. It was evacuated Wednesday after taking on water overnight, according to volunteer Ana Platero.

Cots where people slept the night before floated on 2 feet of water Wednesday as people waited on tables or sat on elevated bleachers to be evacuated to a nearby middle school.

At Lake Arthur Place, a nursing home in Port Arthur, rescue workers evacuated up to 74 bedridden patients after an altercation involving relatives who tried to take out loved ones on their own, CNN affiliate KTRK reported.

Some Port Arthur residents sought shelter in a bowling alley.

Cynthia Harmon told CNN by phone that she has been trapped with her two sons and two grandsons in the attic of her Port Arthur home. She has been waiting for rescuers since midnight.

"I didn't think the water was going to rise like that," she said. "I've never been in anything like this."

Her family was out of food and water. "We're just trying to hang in," she said.

Police made an appeal for volunteers to bring boats and help.

"Rescue boats welcome in Port Arthur to assist emergency personnel," the police department posted on Facebook. The city is asking anyone trapped to hang a white towel, sheet or shirt outside to alert rescuers.

The disaster in Port Arthur is part of Tropical Storm Harvey's devastating encore. Harvey made landfall once again Wednesday morning, slamming into the Louisiana coast near the Texas border.

Harvey has now broken the US record for rainfall from a single storm, CNN senior meteorologist Dave Hennen said. It has dumped almost 52 inches of rain in parts of Texas.

The coastal cities of Beaumont and Port Arthur got pummeled with 26 inches of rain in 24 hours -- and it's still raining.

Port Arthur, a city of about 55,000, is in exceptional danger because water from Beaumont is expected to flow toward it.

In Beaumont, a man who accidentally drove a truck into a flooded ravine that looked like a street was rescued by CNN correspondent Drew Griffin, producer Brian Rokus and photographer Scott Pisczek on Wednesday. "I want to thank these guys for saving my life," said the driver, Jerry Sumrall.

In Woodville, a town north of Beaumont, US Rep. Brian Babin said he was trapped at home with members of his family after a creek overflowed.

"I'm in my home in Tyler County, and we could not get out unless a helicopter plucks me out or I get my boat and launch it," the Texas Republican told CNN by phone. "We're fine. These waters are going to recede hopefully sometime this evening."

On Wednesday afternoon, a US Navy helicopter plucked seven people from floodwaters.

While heavy rains have ended in the Houston area, more danger looms.

Emergency workers and throngs of volunteers are going door to door for a fifth day Wednesday, trying to rescue victims of the flood. Houston Police Chief Art Acevedo said authorities have received 60,000 to 70,000 calls for help.

The US Coast Guard is searching for two civilian rescuers who were swept away after their boat capsized Tuesday night, the Harris County Sheriff's Office tweeted Wednesday.

Three volunteers were trying to cross Cypress Creek when their boat crashed and capsized, sending all three under a bridge. One of the volunteers was found clinging to a tree.

About one-third of the Houston area is covered in water. And it's unclear exactly how many people still need to be rescued, Texas Military Department spokesman Lt. Col. Travis Walters said.

One of those stranded is Anike Allen. From her home in a northeast Houston suburb, Allen said she has seen neighbors get airlifted as she slowly runs out of food.

While her home is not completely flooded, she's not sure if there's a way out of her neighborhood.

"The water is receding here, but we are not sure if it's going to come back," Allen said.

For the first time since the weekend, authorities say the flooding in Houston is slowly receding in some areas.

The Houston Astros announced they will play a doubleheader at home on Saturday against the New York Mets. The team played the Texas Rangers in St. Petersburg, Florida, earlier this week because of the hurricane.

Houston Mayor Sylvester Turner said the home game will provide "a much needed boost for our city" and offer residents "some aspect of normal life."

But dangerous flooding will continue from Houston all the way into southwestern Louisiana for the rest of the week, the National Weather Service said.

Houses built 'inside a lake' could degrade

Controversy has surrounded the placement of houses near Houston's Barker and Addicks reservoirs, especially since floodwater overflowed the latter.

And those homes "will be inundated for several weeks," said Jeff Lindner with Harris County Flood Control.

"The closest comparison that I can draw to those homes ... is Hurricane Katrina," Lindner said.

"When water sits in a house for several weeks, the house begins to degrade."

Lindner said those residents will be able to return after several weeks, but "we are not sure what the condition of those homes are going to be."

He also said it's unclear whether rebuilding homes in the same area will be allowed.

Louisiana under the gun

Harvey is now threatening to dump an additional 3 to 6 inches of rain from southwestern Louisiana into western Kentucky, the National Hurricane Center said.

It's expected to fizzle to a tropical depression by Wednesday night, but the danger is far from over.

"We are dealing with a state that has already had a lot of rain this summer, so we are very aware and conscious of the potential for flooding," Louisiana National Guard spokesman Col. Ed Bush said.

'We help each other out'

Strangers from across the country descended on Texas and braved treacherous floodwater to evacuate victims.

Tom Dickers is among those who came hauling boats from Dallas and San Antonio.

"This is what Texans would do. We help each other out," Dickers said.

At least 9,000 to 10,000 people have been rescued in the Houston region by first responders. Volunteers said they have helped as many as 400 in one day.

Some would just "come crying, just wanting help," volunteer Bobba Bedri said. "I just felt like I had to get more people out, keep going and keep going."

CLARIFICATION: Harvey made its first landfall at 10 p.m. local time Friday, initially striking a barrier island near Port Aransas, Texas, before moving onto the US mainland two hours later near Copano Bay, Texas. After re-emerging into the Gulf of Mexico on Monday, it made another landfall Wednesday in Louisiana.