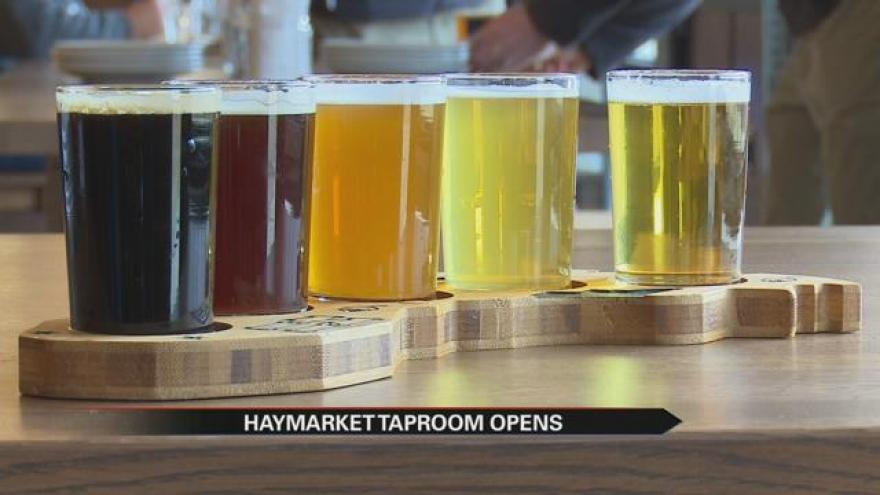 The grand opening of a brewery in Bridgman has allowed an abandoned Michigan State Police station to be reborn.

“Opening day!” Lloyd Davis, a customer, said. “I’ve been waiting for this place for a long time!”

On Thursday afternoon, many were pouring a glass to celebrate.

“We officially just opened, by the way!” Peter Crowley said, just after 11 a.m. Thursday. “We are officially open! Finally!”

Crowley is a veteran brewer who is the owner of the newly opened Haymarket Taproom off Red Arrow Highway in Bridgman.

He’s also the owner of Haymarket Pub and Brewery in Chicago, which he opened six years ago.

Crowley has visited southwest Michigan for years, and he decided to tour the area in search of a new venue with a local economic developer about two years ago.

“We drove around all day!” Crowley said. “We had lunch, and then at the end of the day, she literally was [like], ‘there’s this one property, it’s been available for three years,’ – almost, like, just down-selling it to us. And we were like, ‘well, it’s on the way; let’s check it out.’ And as soon as we drove in, we were like, ‘this place is amazing.’”

It was love at first sight – an old Michigan State Police post that had been closed since 2011.

Crowley bought it, and the transformation began.

“The jail cell had a concrete roof on it,” Crowley said, during a walk through of the brewery. “And then, from right about the top of my boots up, was the boiler room, the HVAC, all of that stuff. So we had to rip out the second floor and then reinforce each side of the room in order to get the tanks in and the ceiling high enough.”

“Here, where you’re standing, is where the police station ended,” Crowley said. “And we cut a hole in the back of it. We added this [pointing to a warehouse addition].”

They built a brewery and a wood-fired pizza kitchen.

About 40 employees have already been hired, and Crowley said that number will grow.

He also said the number of local farmers and businesses he’ll use to supply the brewery will grow too.

“It’s really fun to have – to be able to utilize members of the community for not only hiring and working here, but to supply us with ingredients for beer and food,” Crowley said.

Haymarket Taproom is open from 11 a.m. to 11 p.m. seven days a week, and they are still hiring.

Crowley said, once some warmer weather arrives, you can also expect to see a beer garden and a 9-hole Frisbee golf course outside.