Hazardous ice on I-94 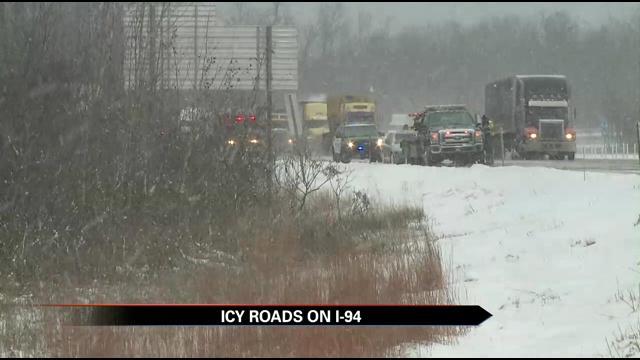 According to the Sheriff there were 53 slide-offs or accidents on Interstate 94 in Berrien County between 6a.m. and 1p.m. on Tuesday.

Sheriff Paul Bailey said a problem spot on I-94 is the curve between exit 22 and 23.

Bailey said, "That's a problem spot every year! 'Putz curve' is what they call it. There seems to be quite a few accidents there. That's why speed has to come down!”

On Tuesday crews pulled one car out of the ditch in that problem spot, and dispatch said no one was hurt.

Bailey said,“If you do slide-off and go into the ditch slower speeds means less damage and less injuries.”

The Sheriff said there are 43 miles of I-94 that stretch through Berrien County so officers were busy all morning. Drivers said the traffic was awful.

Emily Kozel said, “It's taken about another hour than it usually does.”

Kozel was driving up I-94 from Chicago to Jackson, Michigan.

Emily Kozel said, “I'd be driving and all of a sudden it would get a little shaky and feel like I was going to go off the road so it's a little scary!”

Linda Poziwilko said, “They're quite slippery i just slid through the stop sign over there thankfully no one was coming! That saved me.”

Sheriff Bailey said MDOT was putting down salt and clearing I-94 of snow but ice was still building up because of the frigid temperatures.