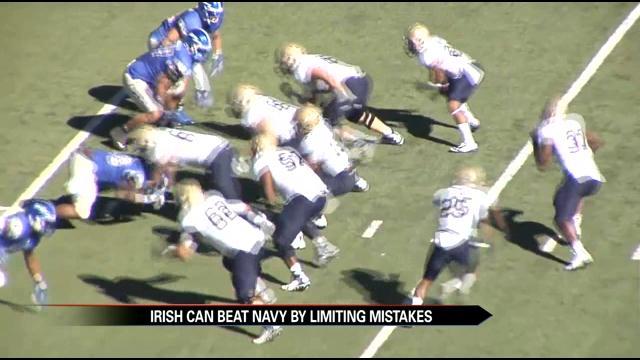 This Saturday will be the 88th time the Fighting Irish face the Navy Midshipmen. They will take the field in Landover, Maryland with kickoff set for 8 p.m.

Every play counts for Notre Dame's offense this week.

“Every possession is so important and scoring and not turning the football over, so that really was the focus this week.” Irish Head Coach Brian Kelly said Thursday.

As they Irish get ready to go up against a Navy defense that's held its opponents to just 19 touchdowns in the red zone this season.

“For us to be successful, you've got to slow them down and you can't be in second and short and first down is really important for us.” Kelly said.

In order to prepare for the Mid's triple option offense, Irish sophomore Malik Zaire worked double-duty this week as a first-team backup and a scout team quarterback to simulate Navy's Q-B Keenan Reynolds.

“The bulk of the triple option stuff fell on Malik's shoulders, so we had a management of schedule that was a little bit different this week, but we got some real good looks there, Malik did a good job for us there.” Kelly said.

Navy's offense is aggressive, accounting for 33 touchdowns and more than 3,500 yards in total offense this year.
“Everybody's got their own way of trying to defend it, and they all come up the same way, they give up a lot of yards.” Kelly said.

The Midshipmen have racked up more than 2,000 yards in rushing alone, with few turnovers or penalties.

“We're not preparing for them turning it over, they didn't turn it over or get a penalty on us last year.” Kelly said.

Last year the Irish defeated the Mids in a shootout. 38-34 was the final score.
Share this article: