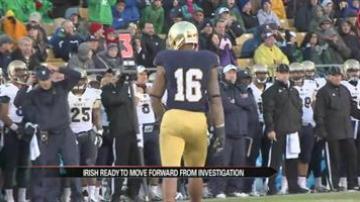 NOTRE DAME, Ind.-- A university official confirms that a fifth player was pulled from practice and competition after his name was brought up in part of Notre Dame's academic investigation involving four other players and several students.

The news came with just less than 48 hours until game day.

“You never want to hear about a young man being pulled from practice and competition," Irish head coach Brian Kelly said. Thursday.

For the second time in just two weeks, Head Coach Brian Kelly has gotten what he calls "shocking and disappointing news" involving his players.

Senior safety Eilar Hardy was pulled from practice and competition.

“There’s accountability and responsibility and that will ensue here.” Kelly said.

“I don’t know what the outcome is going to be but I do know that we are now moving very quickly because we’ve concluded the investigation.” Kelly said.

The punishment will be left to the university's honor code process, a Notre Dame official says.

“My knowledge of how that process works is now we would obviously adjudicate pretty quickly.” Kelly said.

And now with the investigation behind them, Kelly says his Fighting Irish can finally move forward.

“This brings a big part of closure for us, so now we can really just focus the next 48 hours on preparation for Rice,” Kelly said.

Hardy was not projected to start Saturday, but three of the five players involved in the investigation were expected to be returning starters this season.